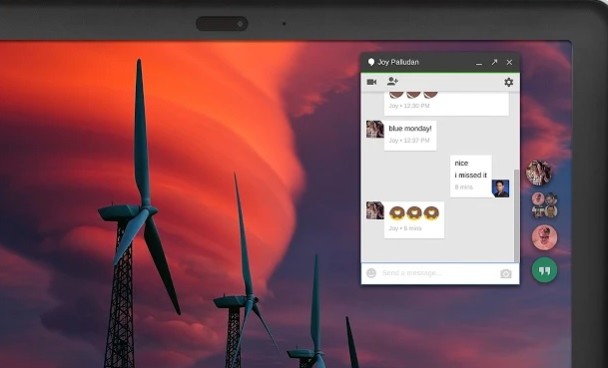 Google’s Hangouts service is benefiting from the company’s latest new push behind the software, with the app now arriving on Windows and the Chrome OS as a dedicated standalone platform, meaning you won’t need to bring it up through an internet browser – you can just load it on its own.

Hangouts is an instant messaging and video calling system which exists as Google’s answer to Skype. Google now wants to bring it out of the browser and onto the desktop, in the same way as Skype does.

“When you’re chatting with your friends and family, you want your conversations easily accessible, not buried in browser windows,” said Google software engineer David Levin.

“Today, we’re introducing the Hangouts Chrome App for Chrome OS and Windows – a simpler, faster way to use Hangouts on your computer alongside whatever else you’re doing.”

The app will bring all your Google contacts, plus the Hangouts messaging and video calling interface together into a single window, again much like Skype does, which provides a simple organised space for using Hangouts.

You’re going to need to add contacts through Google+ to chat with people though, but if you’ve already used Hangouts on browser your contacts should be ready and waiting when you log in.

Notifications are also enabled and the app integrates itself with all your existing Hangouts, meaning notifications, messages and logs should be seamless between both the browser and standalone versions of Hangouts, as well as versions on mobile devices such as tablets and phones.

The app should also be Google Voice enabled, meaning that, if it works okay, you should also be able to make phone calls with it, as well as send and receive SMS messages (texts) through the Hangouts window. if all goes to plan, the app should finally ease the woes of Voice users who have been having a tricky time getting Hangouts and Voice to work together,

The Hangouts app has gone live today, and is available at the source link below from the Google Play Store. Those who already use Hangouts on browser will be offered the app when they next use the service on browser.