Home » Operating Systems » Apple iOS » iPhone 7 and 7 Plus Launching Tomorrow! But What’s This About an iPhone 7 Pro??

iPhone 7 and 7 Plus Launching Tomorrow! But What’s This About an iPhone 7 Pro?? 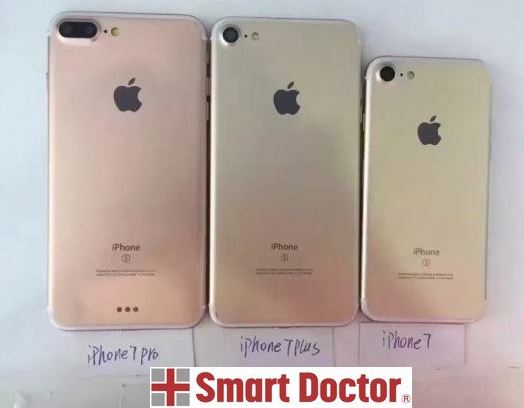 So we know it’s definitely arriving tomorrow, and we’ve heard all the rumours about the standard iPhone 7 and also the larger iPhone 7 Plus.. but what’s this about an iPhone 7 PRO…??

Yes, it’s possible Apple might be launching not two, but three, new iPhone models tomorrow at its special event from California and the extra model has specs to back it up – as well as a potential spoiler of what it will look like, with a photo taken of it alongside it’s siblings.

Believed to feature a 5.5-inch LED-backlit IPS LCD display with 1080 x 1920 pixel resolution presented on a sapphire crystal screen, this mythical beast would also feature the same Apple A10 chipset for processing as the standard and Plus models, as well as iOS10, 3GB or RAM and 32GB, 128GB and 256GB internal storage options.

Again the rumoured removal of the 3.5mm headphone port seems apparent and the iPhone 7 Pro, along with wireless charging available to replenish the handset’s Non-removable Li-Po battery.

A dual-lens 12-megapixel camera is included as the main picture taker, and you’ll also note from the photo (which comes courtesy of Smart Doctor) that the camera location and shape of the housing on back of the handset matches that from the leaked production diagrams which surfaced recently. So perhaps that one was not the iPhone 7 Plus at all – but was instead this wildcard, the iPhone 7 Pro, all along.

The Pro version also appears to feature those expansion connections on the lower back which again we saw in the earlier diagrams, suggesting this model might support modular features and add on accessories.

Hopefully the mystery will be answered tomorrow when we meet the whole iPhone 7 family – but would it be so much of a surprise that Apple might have something extra up its sleeve – especially considering Samsung just dropped its Galaxy Note 7 phablet. Apple could really take advantage of a bad situation its leading rival currently finds itself in.