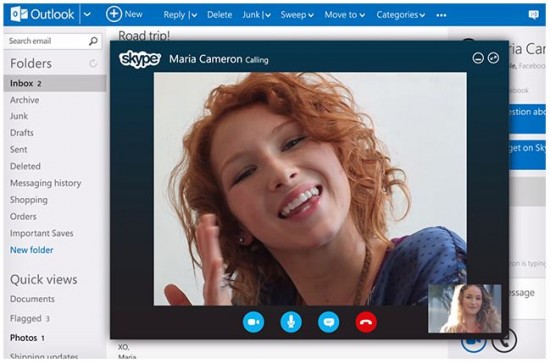 Those long-distance video calls to friends and family around the globe could become a lot more realistic in future, thanks to the development of 3D video calling technology.

In an interview with the BBC, Microsoft’s Corporate Vice President for Skype Mark Gillet confirmed that the company is currently working on a technology which can capture images in 3D and then project them elsewhere – in essence, this will become viewing your friends in 3D on Skype.

Microsoft, who acquired Skype for $8.5 billion in 2011, has been working on 3D video calling for some time but feels that the technology itself hasn’t progressed far enough to warrant the introduction of 3D Skype calls.

“We’ve seen a lot of progress in screens and a lot of people now buy TVs and computer monitors that are capable of delivering a 3D image.

“But the capture devices are not yet there. As we work with that kind of technology you have to add multiple cameras to your computer, precisely calibrate them and point them at the right angle.

“We have it in the lab, we know how to make it work and we’re looking at the ecosystem of devices and their capability to support it in order to make a decision when we might think about bringing something like that to market.”

In general, the boom that was expected from 3D technology seems to have fizzled out. Whilst 3D is now a standard feature in new HD TVs, most seem un-fazed by it and would rather stick to 2D. With that said, one of the biggest computer companies in the world launching 3D video calling on what is arguably the world’s biggest communication platforms could just be the boost that 3D needs.

In other Skype news, Gillett also confirmed to the Beeb that Full HD 1080p Skype video quality will be coming to the Xbox One as well as tablets and laptops. Skype is calling this “super-high definition”, which is a little confusing, and also hinted at the sharp video calling quality coming to the PlayStation 4 in the future.