Nyko Debuts 3.5in Hard Drive For The PS4 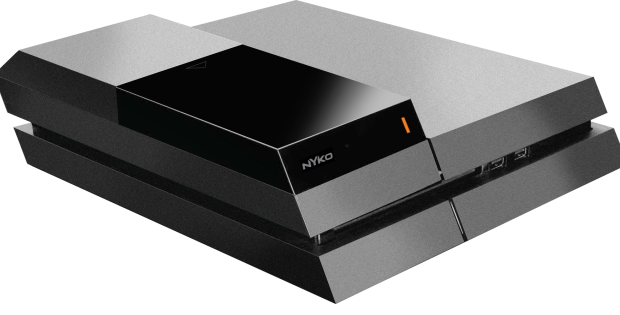 Ever wanted enough storage on your PS4  to be able to download absolutely everything and never have to need to delete stuff to free up space? Well, Nyko’s new Databank for PlayStation 4 could be the answer to your troubles – the stylish Databank can provide more storage than one would ever need for Sony’s console.

The Databank snugly fits over the PS4 without compromising the console’s unique design, its main use is to replace the internal HDD of the console and allow a larger 3.5 inch hard drive to be used. That type of disc drive is more commonly used in desktop PC’s, meaning you’ll eventually be able to use PC hard discs in conjunction with the PS4.

The device is currently going through the process of being patented by Nyko prior to release, but once it does come out you’ll be able to cop yourself a normal desktop PC hard drive and plug it on in. Current models of 3.5in HDD are available in storage sizes up to 6 terabytes, or 6000 gigabytes. that’s enough for about 100 full PS4 games, and then some.

It does seem a lot like overkill, but Nyko’s attachment addresses one of the common problems with the PS4’s current internal 500GB HDD – the fact that some games downloaded from the internet can weigh in at up to 50GB each. Additionally, other media such as music, videos pictures also weigh heavily on the default PS4 drive.

Nyko’s Databank could very well support 3.5 inch hard drives similar to this one.

Nyko’s Databank can sort out these problems, and for the moment is slated for a release in the first half of the year, at an undisclosed price. Although the device does allow the addition of PC hard drives without cables or other clutter, it still means you may have to purchase your own devices to go with it, and hard drives at the higher end with storage in the terabytes can cost big money.

Here in the UK, current prices for a 6tb 3.5 inch hard drive are floating around $200, a pretty big investment to have to fork out on top of the price of the Databank and PS4, although prices for hard disc drives tend to take a dive as newer models arrive, so by the time the Databank does arrive it may work out cheaper.

For now it’s mostly up in the air with regards to which models and sized of hard disc drive will work with the Databank, and indeed right now the device isn’t even on shelves. We’ll report back later in the year if the device does take off, and we’ll try to confirm then what can be used with it.