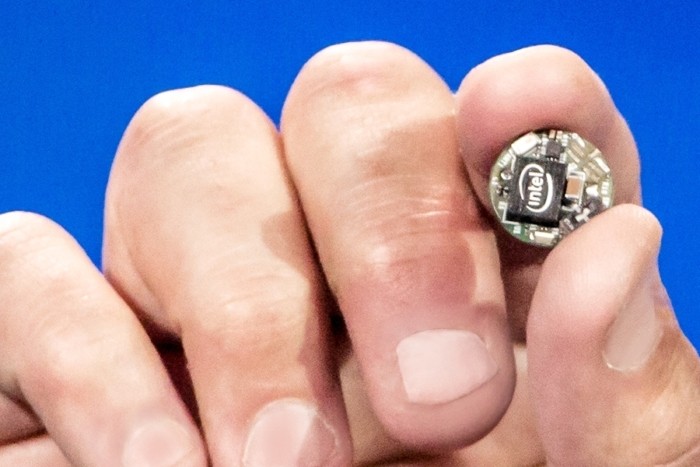 Intel have stepped up their push into the wearable sector, providing what seems to be a challenge to mobile chip sector giant Qualcomm, with the announcement of a new chip, named Curie, which adds computational functionality to the smallest of devices with minimal power usage.

Curie is also incredibly small – the size of a button – and according to Intel the device is capable of transforming seemingly everyday items into gadgets capable of doing computations, even those as small and mundane as jewelry, luggage, accessories and other small items carried around by people every day.

“[Curie] essentially gets you pretty far along towards a product, you really just have to add your secret sauce on top of this and you’d have a pretty great wearable product,”

The tiny Curie chip even has a small real time operating system on board, which, along with accelerometer, gyroscope, Bluetooth LTE radio and a six axis sensor, make the device one of the smallest ‘computers’, if you will, that has ever been made.

SEE ALSO: Samsung Launches Galaxy A3, A5, E5 and E7 in India

The main focus of Intel’s Curie chip is to provide a hardware platform for developers of small devices with big ideas. The framework is there with the hardware, and according to Intel all developers need to do is adapt the chip and the software required to make their tiny wearable do whatever they want.

A development kit for Curie is thus under production, with Intel being able to provide the real time operating system and the development tools for a Curie device with reference wearable applications called Intel IQ Software Kits.

The applications of Curie are staggering, truly boggling the minds of developers who up until now have had to rely on traditional hardware in order to kick start their own wearable projects. The last piece of the puzzle, a Curie chip can be used in any and all small wearables for any type of application.

The only real constraint is power – the chip might not require much, a watch battery in the most basic case, but it can also be recharged via traditional plug in means. Of course, wireless charging with a Curie chip, of that technology is implemented, could mean that the device will be totally free of wires, even when needing a charge.

Curie is set for release in the second half of the year, and Intel have high hopes for the minute device. Availability and pricing isn’t yet known, or whether you’ll be able to pick up one as a consumer. However, the latter is most likely – Curie developers will need to get their hands on the hardware in order to test out its many uses.