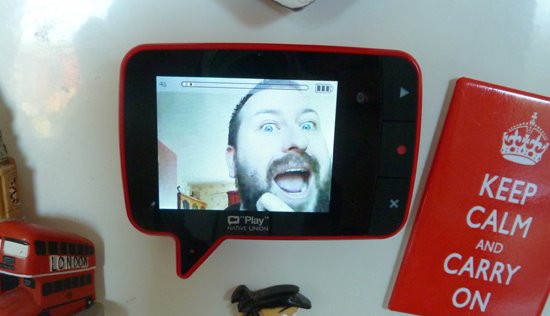 The Gadget Helpline was recently sent a charming little device from Native Union called Play – a “video memo pad” which is essentially a video Post-it note that allows you to record a short reminder or message for yourself or another person which can be stuck onto the fridge with a handy magnet on the back. It’s a pretty smart gadget and most importantly it’s so simply to use.

The Play gadget is presented in a stylish slip case, the front part affixes with a magnetic fastening which can be opened like a book and on the inside of the front part we find a photo section showing off several of the Play’s uses, including the recording, hanging it from a door handle or fridge door. Opposite this we can check out the suitably shaped speech bubble device itself, sitting behind a clear section of the packaging. 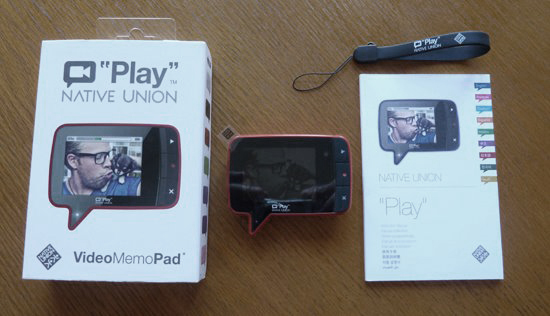 Slipping out the main portion we find the Play device itself (which requires three AAA batteries, which don’t come supplied), multi-lingual instruction manual, a magnetic backing plate and an attachable strap for hanging the Play on things or possibly wearing it around the wrist (presumably – as it’s made from the same durable stuff as those rubber charity wristbands. Help the Heroes etc.)

What, no USB connection or PC set up discs? You ask.
Nope. Play is a completely self-reliant gadget – find some batteries and get started!

The Play gadget itself, as we mentioned, comes in an appealing speech bubble shape imagined by award winning designer Fabien Nauroy and features 2.4” display, camera lens, LED message indicator and three very simple and sizable rubberised functional buttons. These buttons include symbols for Play, Record and Delete (“X”) which do exactly as you’d expect and are all you really need on such an easy-to-use device. 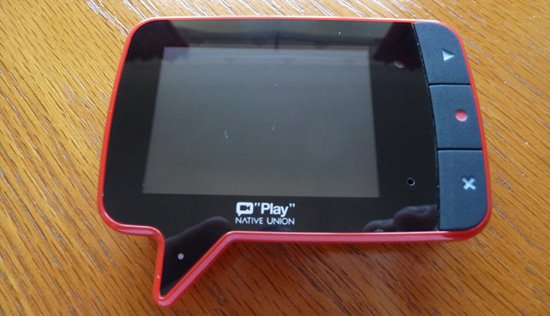 Holding any of the buttons for a just a couple of seconds will bring up a start screen with the Native Union logo, followed by date and time (which can be set by holding down the Play and Record symbols). Once you’re ready to record, you simply press the appropriate red dot button and the camera will activate.

Looking directly at the screen should get you in the middle of the shot, but it can take a moment to get yourself positioned correctly in relation to the tiny lens. When you’re ready to record tap the button again and speak your message (“Gone to the shop”, “Dinner in the microwave”, “Dear John..” etc.) which can last up to 180 seconds, but of course the more you use in one go the less messages you’ll be able to save.

When you’re happy with your message attach the magnetic back plate, which simply snaps itself onto the Play device and stick it on your fridge, or use the strap to hang it or carry it around. When a new message is recorded and yet to be viewed, you or your recipient can access the new recording with a tap of the Play button. This will bring up a still of the message with an icon stating its duration, time and date. Another press of Play will allow you to watch the message back or if you have a number of recordings saved a double tap of the button will take you to the next message

Once a message is finished with it can be discarded by a touch of the “X” symbol and you’ll be asked to confirm that you want the message erased permanently – and once it’s gone it’s gone.

We’re not looking at any of that high-end 12-megapixel camera or Super AMOLED display technology here, but it’s really not needed and simplicity is the key to this gadget’s magnetism. The low-demanding functions mean the battery has a lengthy life-span of up to 4 hours with standby up to 45 days.

The overall beauty is anybody can use the Play gadget. There’s no tech jargon or buttons which leave you thinking “what does that one do?” It’s just the basics and simple for anyone to use – your Gadget Helpline blogger even managed to get his 69 year old tech-illiterate mother to record and playback a message with little fuss!

At £49.99 it’s quite pricey compared to a pack of Post-it notes, but if you’re looking for a versatile little gadget available in a range of bright colours that will make message sharing a lot more fun – and if you think it’ll outlast being simply another household gimmick – we’d recommend the Play video memo pad!