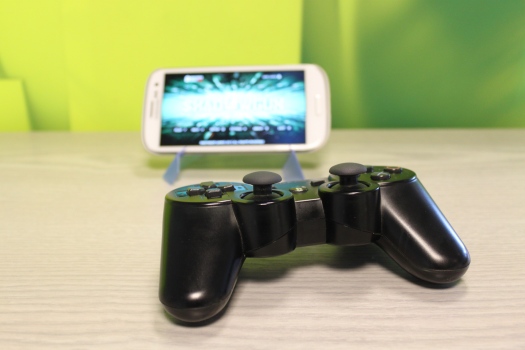 Using Android offers many advantages over rival platforms from Apple and Microsoft, the biggest of which is the ability to install all manner of different softwares, tweaks, and apps. Google likes to keep its platform open, but developers like to push the openness even further. If you’re willing to take the plunge, there’s a whole world of awesome things you can do with your Android phone or tablet out there.

Our new favourite trick is using a wireless Sixaxis PlayStation 3 controller to play games on a phone or tablet. It might seem crazy at first – a games console controller made by Sony working on all sorts of Android tablets and phones is pretty insane – but it actually works like a dream and makes gaming infinitely better.

We’re going to guide you through setting up a PS3 controller with your Android smartphone or tablet, but be warned: it’s not for the beginner, nor the feint hearted, nor those who have no patience. If you’re a big Android fan or you’re willing to take the time to read up and learn as you go, you’ll be fine.

This step is likely to divide many. Gaining root access for Android is the equivalent of Jailbreaking for iPhones. It will invalidate your device’s warranty, but it also means you can do pretty much anything you like with it. Pretty much any Android device can be ‘rooted’, and there tends to be different ways for each manufacturer.

As this process invalidates your warranty, we’re going to go right ahead and say that you do this at your own risk. We suggest heading over to the excellent XDA-Developers.com to read up on how to root your device, take your time and get it right. Once you’ve read up, it’s not all that hard if you follow the steps correctly.

Unfortunately this little tweak doesn’t work on every Android device in the world – that would be very impressive. Thankfully there’s a free app that you can download from the Play Store that will quickly tell you if you’ll be able to use PS3 controllers with your device. Search for ‘Sixaxis’ and download ‘Sixaxis Compatibility Checker’ for free.

Open the app, hit Start and wait to be notified if your device is compatible. If it is, tap OK and close the app, you’re ready for the next stage. If it’s not, you’re out of luck for now. New devices do get added from time to time, so it could be worth checking back occasionally.

This is the app that does the business. Again search for ‘Sixaxis’ in the Play Store, this time download ‘Sixaxis Controller’ – it’s a £1.07 download but it’s absolutely worth it.

The PS3 controller is configured specifically to work with a PS3 via Bluetooth. However, this clever tool will allow you to change the Bluetooth address of your controller to work with the app – download from here. First you’ll need to turn your PS3 controller on and then connect it to your PC or Mac using its Mini USB charging cable.

Now simply open SixaxisPairTool on your PC or Mac, look at the bottom of your device’s screen in the Sixaxis Controller app to find its Bluetooth address and then type that into the box on your PC’s screen next to ‘Change Master’. Hit update and you’re done with this step.

Disconnect the PS3 controller from your PC and open the Sixaxis Controller app on your Android device. Tap Pair Controller then tap Pair. Next, tap Start and you should see text on the screen to indicate the app searching for and finding your controller. You’ll be prompted to change the input method on your device – change it to ‘Sixaxis Controller’ or simply tick that box. If you’re not prompted, follow these steps:

Once the app recognises your controller you’re ready to rock. Pretty much any game that allows you to edit the controls can now be operated using your PS3 controller – pretty neat, huh? We’ve had a blast through Shine Runner using the analog sticks to steer, but there are plenty of other great games out there that will benefit from a gamepad. If you’re feeling brave then give this guide a go and let us know how you got on!