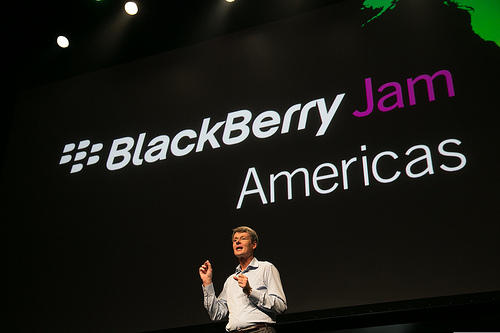 Research in Motion’s progress with the new BlackBerry 10 software for smartphones and tablets is progressing smoothly, and we’ve been treated to a look at the latest version of the OS, which is still being developed.

At the BlackBerry Jam Americas event, RIM introduced a second-generation developer phone for BlackBerry 10, along with new features and an updated Software Developer Kit (SDK) to allow developers to make new apps for the OS. The phone itself has the same specs as the original ‘Dev Alpha’ model, but features a new shell and design that’s not too dissimilar to the Motorola Milestone.

New features such as a unified inbox known as the ‘hub’, touch gestures and the impressive camera app were shown off, but we were most impressed with the new browser. In the past we’ve not been the biggest fans of web browsing on BlackBerrys, mostly due to their small screen, but after a look at the BB10 browser we’re looking forward to giving it a blast.

The browser software is very fluid and smooth, and has been designed with business use and security well in mind. HTML, CSS and Java are all fully built in to the app, which RIM says will make the BB10 browser a class leader. We’ll be interested to see how it shapes up against the iPhone 5 and Safari in iOS 6, which recently blew away all competition in benchmarking tests.

Key features such as ‘Peek’ and ‘Flow’ are incorporated into the browser, with the former giving you the option to swipe a page aside to view bookmarks, history and open tabs, and the latter giving options to share pages socially from within the browser. It all looks very well connected, smooth and quick.

Take a look at the BlackBerry 10 browser in RIM’s first demo below, and let us know what you think.