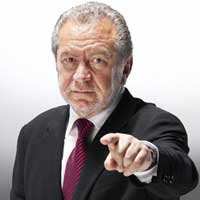 Entrepreneur and telly boss from “The Apprentice” Sir Alan Sugar has joined up YouView, becoming the new head of the Internet Portal Television service.

The grim-faced business giant will lead the charge when the BBC-led consortium behind YouView launches the product in 2012.

YouView aim at bringing live, on-demand, and recordable high-definition TV to the home through a set-top free-view box and will cover a vast range of channels beginning with many of the Beeb’s offerings, also ITV, Channel 4 and Five. The service will also be ready to take apps and updates, with campaigns stating “There’s no limit to what your TV could become”.

Sir Alan will without a doubt bring much to the business and marketing side, but also being such a recognizable television figure makes this union a seemingly perfect one. Potential could be unlimited for YouView TV.

On the other hand however, such a long wait for this to arrive raises concern that established broadcasters may take up the challenge. Companies such as Sky and Virgin Media will have a long period of opportunity to make improvement to their own IPTV services, meaning the only thing left for YouView TV to become will be obsolete.

We can only hope that Sugar can keep the British viewing public sweet until YouView is fully available early next year.

A fan of on-demand TV? Try our article on the latest additions to the BBC iPlayer here.