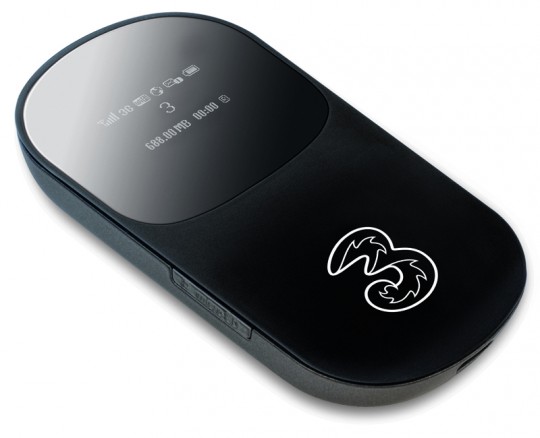 UK mobile network Three has unveiled a new addition to its MiFi range of wireless internet receivers – the Huawei E586.

Allowing users to hook up gadgets such as laptops, tablets and portable games to the internet, the Huawei E586 wireless WiFi dongle is set for a September release and with 80% of Three’s network coverage soon to be upgraded to HSPA+ this means delivery of internet speeds reaching 21.1Mbps for downloads and 5.76Mbps on the uploads.

In addition to the internet features it’s got a MicroSD slot for some seriously heavy storage up to 32GB. It keeps on ticking with a 4.5 hour battery life, complimented by a charging dock and features an OLED display which shows connection speed, amount of data downloaded and time spent online.

Three’s payment schemes for the new MiFi gadget will include a £72 deal for 3GB of data, along with a monthly contractual deal, which for a £40 initial payment and £16 per month delivers 5GB of data.

The Orange E5830 Mobile WiFi receiver has also recently been announced. To see what the brightly coloured mobile co. have to offer check out the Gadget Helpline’s article – here.