Facebook Messenger for iOS has received an update to add new features and bring back previously popular ones that were for some reason removed, as the battle for the supreme instant messaging platform continues.

The social network has brought back the swipe to delete feature for messages within Messenger, allowing iOS users to use the same ‘drag from right to left’ motion as they do with regular text messages to reveal a red delete button. Facebook removed this option from Messenger not so long ago, but has now brought it back due to popular demand.

Also added are Stickers, because emoticons and smileys are just so last year. Stickers are like giant, animated smileys, and they’re accessible through a button on the keyboard. They’re all a little odd, mixed with a little cutesy for good measure, and make us feel like we’re in Japan. 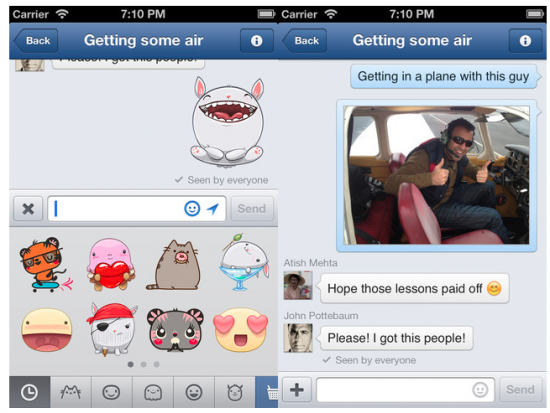 A set of Stickers will be available as standard, but Facebook will also be offering users the opportunity to purchase ‘Premium’ stickers to build up their collection and use something a little different in their chats.

Whilst the update is rolling out pretty much everywhere right now, Stickers is a feature that will be coming to select markets on a gradual basis. Facebook hasn’t confirmed which regions will be getting them and when just yet, unfortunately. To update, head into the App Store on your device and open the Purchased tab at the bottom.