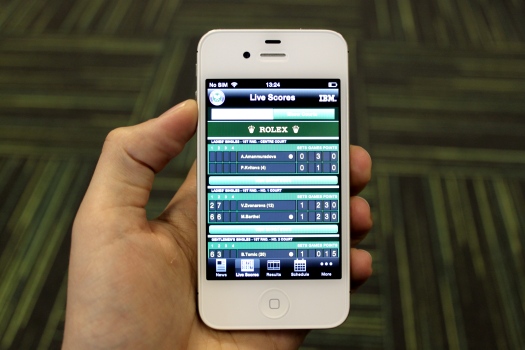 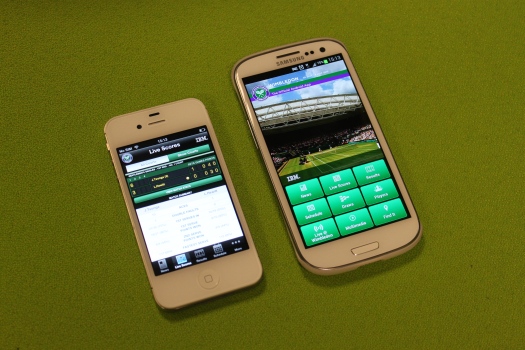 July is almost here, which can only mean one thing for Tennis fans: Wimbledon has started. The world’s most famous grass court tournament is now underway here in the UK, and we’ve decided to round up the best apps to keep you in the action with your gadgets.

Whether you want to watch a match on the go, read up on your favourite player, check the next round’s draw or view live scores and results, there are some pretty brilliant apps around for all sorts of devices. Be it mobile, tablet or even TV, here are the apps that you need from now until the 8th of July.

Android: Works on version 2.2 and up

Apple device users have enjoyed an official Wimbledon app for a while now, with Android users crying out for one. Thankfully this year the app has graced the Play Store, and is available as a free download for any Android device running version 2.2 and up.

The official app offers live scores and results, the play schedule for each day, draws for the next round as they happen, news from the tournament, and even video on-demand highlights from the latest games. For the hardened Wimbledon fan, there’s also ‘Golden Moments’ in the video section to take you back to tournaments of yesteryear. If you’re Murray mad or a Federer fan you can read up on your favourite player in detail. Finally, you can pop your earphones in and tune in to Wimbledon Live Radio for full coverage.

Android: Works on version 2.2 and up, requires Flash Player app

While the official Wimbledon app does a great job of giving you all the information you need, it doesn’t actually let you watch it live. That’s where the BBC comes in with its excellent iPlayer app, which works on both iOS and Android. Download it for free from either the App Store or the Play Store and you’ll be able to catch-up on the games you’ve missed, and even watch them live as they happen.

We love iPlayer because it can turn our mobiles into a portable TV, and provided you’ve got a generous amount of data to use (1GB +), you can watch from anywhere you have a 3G signal. With matches shown on both BBC1 and 2, you’ve also got the option to use your phone or tablet as a second screen, showing one game while your TV shows the other.

Android: Works on version 2.3 and up

In Britain we’re blessed with weather that changes its mind like the, err…weather. This inevitably leads to matches being rained off during the tournament, thus leaving tennis fans with endless hours spent waiting for the players to come back out and get on with it. Virtua Tennis Challenge provides the perfect time waster for your iPhone, iPad, iPod Touch or Android device.

You could go all-out for the full version (£2.99 on iOS, £3.78 on Android), but we feel that the free version hits the spot nicely. This is hands-down the best tennis game out there for mobile devices, with pretty realistic graphics and neat gameplay. You’ve got exhibition, world tour and multiplayer game modes along with different touch gestures to play different types of shot. If you’re bored of all the grass court action at Wimbledon, you can switch to clay, indoor or hard court in the game. 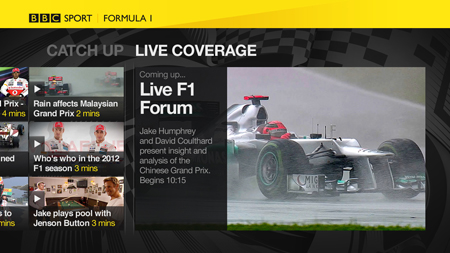 The BBC’s recently launched Sport app is great, and now it’s making its way onto our internet-connected Smart TVs. Like the smartphone and tablet versions, the BBC Sport app offers the latest sporting action, highlights and catch-up videos in a neat and simple interface. At the moment there’s a mass of Wimbledon highlights from the first round of games, plus interviews and other features.

Samsung users should see the BBC Sport app appear in their Smart Hub shortly, as we were able to download ours yesterday (model ES8000). Sony and Panasonic sets are also due to get the update this month. From what we’ve seen already the quality is impressive, with the image being crisp and well detailed.

If you’ve not got a Smart TV, the BBC Sports app is also coming to Virgin Media’s TiVo box this month, and can be downloaded to smartphones and viewed via your laptop or PC by going to the site.

So what are you waiting for? Get downloading and get the most out of this year’s Wimbledon tournament.