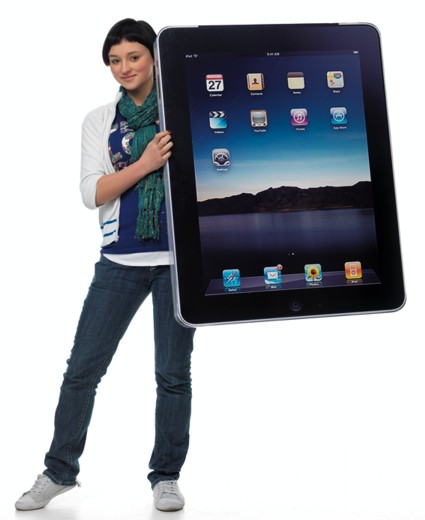 The production of a new larger screened iPad, dubbed the iPad Pro, has been delayed till September, this according to a source with “knowledge of the matter”.

It was rumoured that the tablet, which will feature 12.9” retina display touchscreen, might appear earlier in the year, possibly at the Worldwide Developers Conference (WWDC) which Apple hosts annually. But with production pushed back the iPad Pro might instead find itself launched at an Apple event in San Francisco in October which has traditionally been the launching stage for previous generations of the famous slab.

Bloomberg reported the news and stated that the iPad Pro (amusingly referred to by some as the “MaxiPad”) will be postponed during ‘stagnating’ iPad sales. But despite there still being no official word that Apple is even making the gigantic gadget, the reason given for the setback is that not enough of the larger retina display screens would be available in time to fulfil manufacture needs, this preventing the iPad Pro from going into production in June.

Previous display suppliers for Apple devices have included LG and Sharp but there is no mention of which supplier will be providing them for the iPad Pro – if such a device exists, but there’s plenty of rumour now to suggest it does. It’s just a matter of when we’ll see it.

In addition to the larger 12.9 inch display (12.2 inch in some reports), which is the main talking point, speculation suggests that the iPad Pro will also include USB 3.0 ports which will offer additional data transfer options as well as potential to use a connected mouse and keyboard – further confirming the idea that the larger iPad will be intended for the business user.

Instead of a long rumoured 12.9 inch iPad it’s being suggested now that it’s more likely that a 12 inch retina display MacBook will emerge as Apple’s showpiece at the WWDC on June 8th.