Apple has announced a recall on its two-prong AC wall plugs due to safety concerns.

A fault has been discovered on at least twelve of these AC adapters which have caused electric shocks to users. Despite being called ‘very rare’ Apple has decided that these dozen instances warrant a widespread recall of all units to avoid any further incidents.

The two-prong plug in question came supplied with Mac computers and some iOS devices shipped between 2013 and 2015 and is pictured below for help identifying if you have the affected plug. The design slightly varies dependant on region. 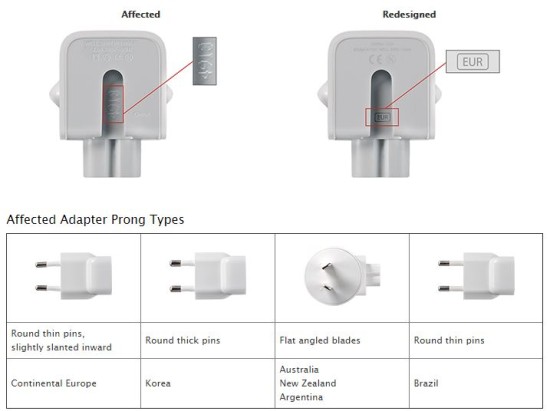 The faulty units are limited to the following regions:

If you suspect you have one of the faulty two-prong AC wall plugs then Apple encourages they be returned to the nearest Apple Store. A replacement can also be ordered online via the Apple Exchange Program, or there is a contact option to request further support or a refund.