A number of bat-fans will find themselves disappointed today as Warner Bros. Interactive and UK retailer GAME have both confirmed that the upcoming Batman: Arkham Knight Batmobile Collector’s Edition has been cancelled and pre-orders for the pricey box set will not be fulfilled. 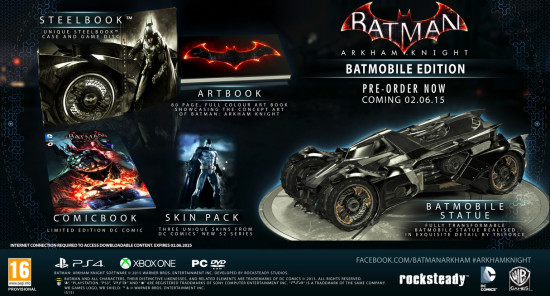 With the latest addition to the popular Batman: Arkham saga set to go on sale for Xbox One, PS4 and PC next Tuesday many had paid a hefty fee of £169.99 in advance to get a steel-book edition of the game itself, limited edition comic book, art book, skin pack and, of course, a replica of the brand new Batmobile as it appears in the game – the key selling point of the bundle.

The promotion for this attractive Arkham Knight bundle boasted that the model was ‘fully transformable’ and ‘realised in exquisite detail’. However, it’s believed that the quality of the Batmobile produced by Project Triforce was not up to the high standard that Warner Bros. Interactive would have hoped causing them to drop the special edition as quickly as the Dark Knight drops street thugs.

With just days to go until the release of Batman: Arkham Knight, Warner Bros. Interactive issued the following statement:

We regret to inform you that we are not able to release the Batmobile Collector’s Edition of Batman: Arkham Knight due to unforeseen circumstances that greatly compromised the quality of this extremely limited run of product. We are deeply apologetic for this unfortunate outcome. If you did pre-order the Batmobile Collector’s Edition, please go to the retail location where you pre-ordered the product and you will receive a full refund of your deposit or it can be rolled over to another Batman: Arkham Knight edition or another product of your choice. We will be providing everyone who purchases Batman: Arkham Knight with the New 52 skin pack, including Batman, Robin and Nightwing, free of charge.

Many Brits had ordered the goods from high street chain store and online stockist GAME, who also issued their own e-mail statement to customers which paraphrased:

Regrettably, due to unforeseen circumstances that greatly compromised the quality of the Batmobile, included within the Batman Arkham Knight Batmobile Edition, Warner Bros has decided not to release this product.

GAME is also offering injusticed customers a £20 discount on the Batman: Arkham Knight Red Hood Edition but this comes as a small consolation and obviously gamers will still be scowling at missing out on all those glorious goodies when the long-awaited game is finally released on June 23rd.

The Batman: Arkham Knight steelbook edition, comic book, art book and skin pack were also available with a Batman Memorial Statue (instead of the Batmobile) but as far as we can see this one is all sold out.