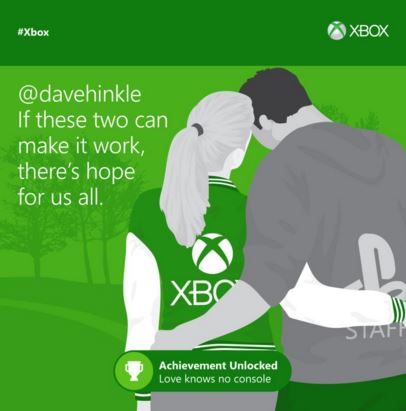 Its Friday, we’re winding down for the weekend and we think that’s a good enough reason to feel happy. But we spotted something on our morning Twitter scan that we just had to share and which we thought would give you even more of a smile – especially if you’re an avid console gamer!

The official @Xbox account has posted this charming image of a lady Xbox gamer and a PlayStation playing gentleman embracing one another with the logos of their chosen platforms proudly emblazoned on their jackets. A caption below cleverly reads “Achievement Unlocked: Love Knows No Console.”

The inspiration for the tweet came from Twitter user @davehinkle who shared a photo that’s been doing the rounds on social media of a real life Xbox/PlayStation couple who were caught flirting at a gaming event. The caption on the original tweet says “If these two can make it work, there’s hope for us all”. It’s just like a 21st century Romeo and Juliet and Xbox has lovingly reworked the image into a rad graphic using the Xbox trademark style and green brand uniform. We think it’s really something that Xbox would acknowledge the ‘other’ brand, even hashtagging #playstation into the tweet. 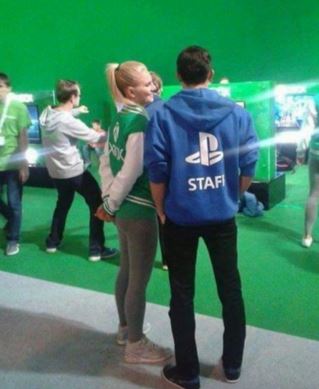 It’s no secret that there’s a long-standing and bitter rivalry between loyal followers of the world’s leading gaming platforms with Sony’s original PlayStation ruling the scene since 1994, until Microsoft released its first console in 2001 in direct competition with the PS2 which came out in 2000. The next generation console wars had begun and the two brands have gone head-to-head for the last 15 years with Xbox One and PS4 the current flagship platforms for the respective brands.

Let’s hope that this touching tweet will stop the console hate – even if just for one day.