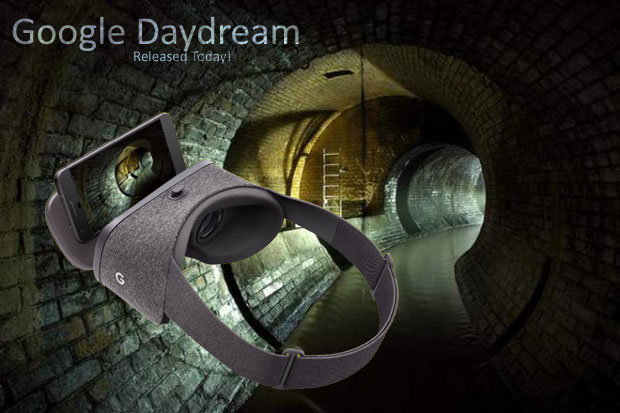 Back in early October we posted about the Google Daydream VR headset that was going to be released sometime in the fall. The wait is now over. Carphone warehouse have them on their site already for purchase.

Only available in Slate at release but other colours will be added later down the line. Googles Daydream VR accessory is here now. EE Carphone warehouse are selling them  in the UK at £68.99, yep, a whole pound cheaper than on the Google store.

Google have been upping their game too. The Google blog have uploaded a large page of information showing many apps, games and movies that are going to be available to try out on the Daydream View. Out of all of them though, we think the Star Chart VR is going to be out of this world, literally. Ahem.

From Harry Potter to the sewers of London, all of these places will now be explorable; as if you are actually there. See the amazing Victorian architecture of Subterranean London without smelling it or getting wet, explore Wonderglade, a theme park that is constantly being added to where you can play carnival-themes classic games such as Tiny Tee Golf and Tip N Tilt Racing.

All things going well, we should have one for review soon and be able to give a fully informed opinion. Until then we will keep you posted.

For all your other VR tips, tricks and gadgetry look no further than the Gadgethelpline!