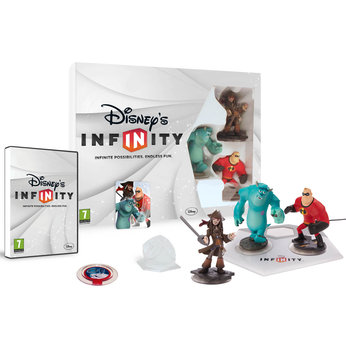 Earlier this week Disney Interactive revealed its exciting new gaming platform Disney Infinity, which will combine virtual interactive and creative play through popular consoles with a range of collectable figures. A few more noteworthy points have emerged since our previous article, so please allowus to update the info and bring you details of the all-important pricing.

According to ToysRUs.co.uk, the Disney Infinity game will become available on June 28th for Xbox 360, PlayStation 3, Nintendo Wii U, Wii and 3DS as an initial starter pack costing £49.99. Pre-orders are available right now, however other sources are suggesting much higher prices – up to £65, in fact.

The starter pack includes the Disney Infinity game itself, three play sets, three figures (Captain Jack Sparrow, Sully from Monsters University and Mr Incredible) and one Power Disc, as well as an NFC-connected base that brings it all to life and allows additionally purchased ‘physical’ toys to expand the virtual experience (a la Skylanders).

Twenty collectable Disney and Pixar characters will become available after launch in figure packs of three or available singularly. These items aren’t currently listed for pre-ordering but US pricing is being reported at $29.99 and $12.99 for triple and single packs respectively.

Packs of extra Power Discs can be bought for $4.99 and these will allow new accessories, gadgets and abilities to be brought into the massively expandable game, which features single player Toy Box mode as well as multiplayer modes with the sharing of gamer creations and challenges to complete through the consoles and their respective networks.

Gadget Helpline will be following Disney Infinity up to release day and beyond to deliver our readers the latest updates on this exciting and ambitious gaming experience!