Internet giant Google and US cellular network Verizon have brought together budget virtual reality with this year’s most highly hyped movie to release a set of limited edition Star Wars Google Cardboard headsets. 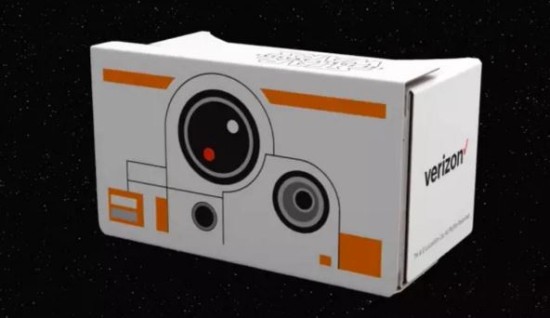 We say limited, but there are in fact 200,000 Star Wars Google Cardboard units up for grabs for Verizon subscribers but we think these unique novelties featuring the likenesses of baddies Kylo Ren and a Stormtrooper, and the loveable droids R2-D2 and BB-8 will be quickly snapped up by gadget fans and saga collectors alike.

The headsets have been launched to coincide with the release of the new Star Wars: The Force Awakens film and also the launch of Disney’s interactive VR experience Jakku Spy which allows fans to explore one of the focal planets in the new movie and is available via official Star Wars app for Android and iOS devices using Google Cardboard.

For those unfamiliar with Google Cardboard, this is a fabulously affordable way that the big G is making virtual reality accessible to the public. Using a foldable cardboard template and some lenses, virtually anybody can make their very own VR headset which attaches to a wide selection of current smart phones allowing viewers to immerse themselves in 360 degree environments.

We expect these to pop up on eBay very soon with Star Wars fans forced to pay up the credits if they want to own this most impressive and most unique piece of memorabilia.

And even if you don’t have the Star Wars gear anybody with a suitable smartphone and a Google Cardboard set can enjoy this VR experience through the official app.