The future human may read this and wonder what we were talking about. They may also read this realising we had an idea of what was coming and welcomed it. Regardless, the future is not set in stone, we can still mold it.
We take a look at the state of this relevant tech, where we are at and where we are heading.

Star Trek has a lot to answer for, in terms of tech development that is.

Prior to all digital advances, prior to the internet, Star Trek has been giving us visions of the future.

Since its original pilot; circa 1964-1965. Star Trek has been gracing our screens with its futuristic imaginings.

Teleportation is certainly being worked on but no way near transporting a human just yet. We have just about managed to transfer a photon from Earth to outer space. Not exactly beam me up Scottie, just yet.

What we do have right now are tablets, universal communicators, smart clothing, artificial assistants, large screen TV’s, smartphones, augmented vision and that’s just a few.  3D printing could also be considered babies first steps in replicator tech. The more you watch Star Trek the more you see items now in every day use, as of 2019.

When it comes to futurism you could do worse than checking out renowned futurist, Ray kurzweil.

Mr Kurzweil is well known for his works and talks on the emerging singularity. He is also a world renowned inventor, thinker and futurist.

That aside, let’s talk about the Borg.

The Borg are a prime enemy of the Federation in the Star Trek Universe. They are a group of humanoids that are completely symbiotic with the technology that is integrated into their bodies. As a whole the Borg form something called the Collective. Each single entity is a drone merely following instruction from the Queen. The Collective is a hive mind that focuses on one mission, to integrate all beings into its whole. This is not done peacefully either. Those who fight against it generally fail, as the Borg say ‘Resistance is futile’. 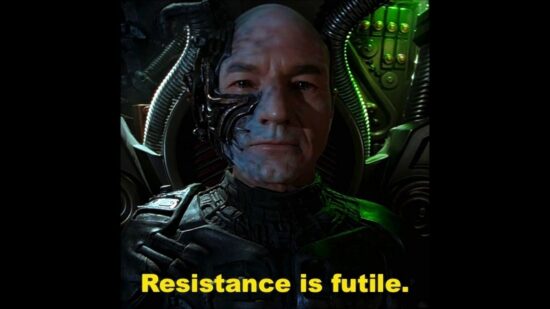 Obviously the Borg are way ahead of anything we are even close to currently. The Borg also have nanobots coursing through their bodies. These bots adapt immediately to threat or via instruction from the drone containing them. They can repair and defend at will. They can also become something new at will, like an augmented organ.

There is a lot of talk on the internet about nanobots paving the way for a new medical future.  Again we are not quite there just yet but this tech is beginning to show up in the rearview mirror.
Like the dystopian future nightmare, Terminator, we may well see this tech speed past. Leaving us in its smart dust any day now.

There are already people alive and well today with technology embedded in them. We imagine this is how the Borg (future human) start originally, just a chip in the wrist, no harm done..

So, the real questions are:

Ready to embrace the Borg within?

Want to have tech embedded in your body?

Love tech or hate it, it’s something none of us can stop, few can second guess.

For future musings and gadget related information, check out Gadgethelpline.