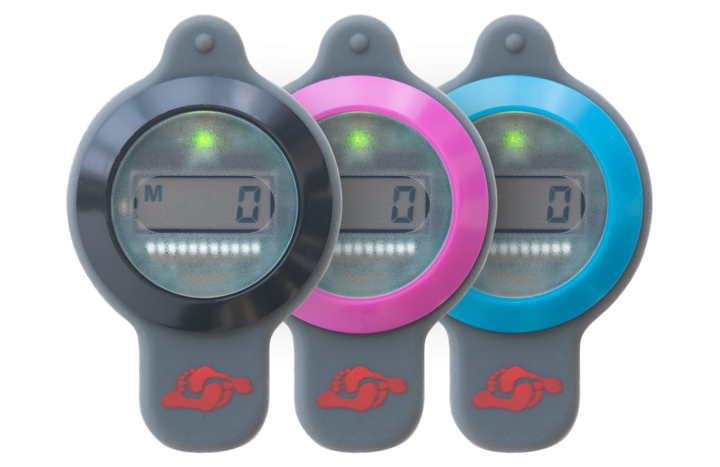 Fitness wearables are a big trend these days. From the Fit Bit to the Microsoft Band these highly technical gadgets will do everything from monitoring heart rate to calculating calories to make you feel guilty about everything that passes your lips. Truly superb and useful stuff for the actively inclined – But it can also all get a little bit complicated.

That’s why I was won over by the charm and simplicity of the MilestonePod (V2) – a dedicated running wearable that ties onto you shoelaces and not only clocks up your steps and distances thanks to an inbuilt odometer but also works out your running performance. Through its companion app you’re given a fairly reliable idea of where to make improvements which is not something I’ve seen before on any other available gadget. And best of all it’s so, so easy to use.

Costing a highly affordable $24.95 at www.milestonepod.com the device is currently only available from the United States, but we at the Gadget Helpline were lucky enough to probably be among the first in the United Kingdom to give one a try and report our findings to you, our loyal readers!

Getting Up and Running:

To get started with the MilestonePod you’ll firstly need to remove the Pod from its holder and pop in the battery. The Pod itself is small, lightweight and unobtrusive and the holder is attached to one of your running shoes by threading the laces through it. Then you can easily place the pod back into the flexible holder when it’s in the best position.

Before you hit the road you’ll also need to install the free MilestonePod app onto an Android phone or iPhone. Once installed, you’ll need to set up some basic profile info such as name, location, gender and height and weight. Your profile also allows you choose which units you use in Imperial or Metric measurements.

Once the MilestonePod is attached to your shoe and your profile is complete, you can pair/sync the device with your smartphone via Bluetooth connectivity – this is how the app receives all the collected data from the Pod. A unique serial number is used to identify your Pod. For greater accuracy you can even pick out your shoe type from a list of pre-set options or alternatively if you can’t find yours on the list you can choose “Neutral Shoe” (which I did for my Karrimors).

Setting off on my first day testing the MilestonePod I tried not to think too much about the fact I was being monitored and just ran in my usual erratic style so that the Pod could give me a true result of where my foot was striking. The Pod was non-obstructive and hardly noticeable when I did my usual running route.

One thing that is worth noting is that the Pod may look like it’s idle and there’s nothing displaying on it. I later found this is normal and in fact it is awake as soon as the green light blips and it will only track a workout when it realises you’ve been in motion (running or walking) for six minutes. Anything less and it won’t record (walks from the front door to the car for example). I was sceptical that it was actually turned on, or that I hadn’t put the battery in correctly but I checked the FAQ on the very helpful website and all was well when I checked the app, which we’ll come to next.

When I finished my run and quickly and easily synced the Pod with my phone the app told me the date and duration of my run, the amount of steps taken, my average pace and best pace per kilometre and even how many calories I had burned. And of course it revealed what I had expected – that I’m a natural heel striker with 55% impact on the back of my foot, 45% on the mid and 0% on the toes.

The MilestonePod can be set to display in Miles (MI) or Kilometres (KM) with a performance overview shown on the Dashboard which also gives encouraging updates on your ‘Runficiency’.

I was very impressed by the detailed findings from such a simple little device and it helped me focus on improving my style on the second day’s run, the same route but much better results thanks to the tracking of the MilestonePod – 48% heel, 45% mid foot and 7% toes – and this has only gotten better in subsequent runs, all thanks to this gadget and an app!

Day 1 test run, compared to Day 2 test run. Based on the results on the MilestonePod app I was able to make changes to my running style and improve my foot strike and pace.

More insights and stats can be tracked including cadence, stance time and stride length and with the more runs you do the greater the accuracy can become through calibrating the Pod to know your exact running patterns so there is definitely long term usage potential for the MilestonePod and there are virtual rewards to be gained from progress too!

The MilestonePod isn’t going to replace the Fit Bit in terms of overall fitness tracking, but it doesn’t intend to. But for value for money this is a really fantastic addition to any runner’s arsenal of gadgets!

What Do We Love About It:

Superbly detailed run tracker.
The app interface is welcoming and user friendly.
No GPS requirement / no need to carry a phone.
Detailed results and tracking, simple to understand.
No fiddly buttons on the Pod.
Intelligently starts and stops when detecting motion.
Replaceable battery with 4-6 months lifespan, no charging required, indicator on the app.
20 hours of run data recordable.
Shoe life tracking through odometer.
Lightweight and weatherproof (good for British weather!)
Good for injury prevention.
Incredibly affordable.

For more info and to purchase one please visit www.milestonepod.com.

The Gadget Helpline would like to thank Nancy and the team at Milestone Sports for allowing us to test the Milestone Pod.