GoPro unveils Hero4 Black and Silver, along with entry-level Hero 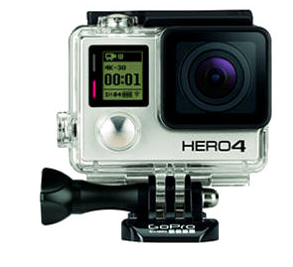 So today GoPro have officially taken the lid of their brand new Hero products, the black and silver Hero4 while also unveiling a new entry-level Hero camera too.

Of the two Hero4 models, the black is the high-end version, followed by the Silver mid-range camera. The differences: the Black one is arguably more centered about the professional, and is capable of recording up to 2160p @30fps video, while the silver one isnt able to do this; it is the first to feature a colour touchscreen.

As mentioned, the Black Hero4 is arguably aimed at the professional user, who requires a greater output in terms of resolution. The image processor used in the Hero4 promises improved image quality and twice the performance of its predecessor.  When it comes to video recording, as well the 2160@30fps, it is also capable of recording 2.7K@50fps and also 1080p@120fp. In addition to the video recording capabilities, the cameras can also capture 12MP photos in 30fps bursts. GoPro have also added a dedicated button to improve usability, although users still have the option of using the Smart Remote with its impressive 180m range, or of course the GoPro app. The Black Hero4 will cost $500/€480/£370.

The Hero4 Silver and it’s colour touchscreen is likely to appeal to a lot of users. Anyone who has previously used a GoPro will know how tedious having a small monochrome to view settings is, and I’m sure that a lot of people have abandoned the camera purely for that reason. However, while the cameras output may not be as great as the Black one, the benefits of having the colour screen mean you’re able to preview photos and videos and easily navigate the camera’s menu without the need to us the GoPro app on your smartphone. Its recording output is 2.7K@30fps, plus has high-framerates of 1080p@60fps, 960p@100fps and also 720p@120fps. As with most Hero cameras, it’s also waterproof up to 40 meters, although the touchscreen will not work underwater – you’ll have to use the hardware buttons. It also has double the dynamic range as it’s predecessor and also the option for attaching an external microphone. When released, the Silver Hero4 will cost$400/€380/£290.

Finally, GoPro also unveiled their first entry-level model, simply called Hero. It’s an ideal action camera for anyone who is on a budget, or perhaps not too fused about all the extra high quality outputs available on the others. Its cable of capturing video at 1080p@30fps and 720p@60fps which I’m sure will be more than suitable for most. As you’d it expect from GoPro, it rugged and is also waterproof – a key feature of the Hero series. Understandably, being an entry-level camera, it does lack quite a lot of the features of the higher end models. To be honest though, being priced at just $130/€125/£100, it brings GoPro’s action cameras to the masses, and I’m sure that it will prove to be a popular option for consumers.

If you fancy getting your hands on one of them, they go on sale October 5th.