Apple iPhone 7 and iPhone 7 Plus Have Arrived – What’s New? 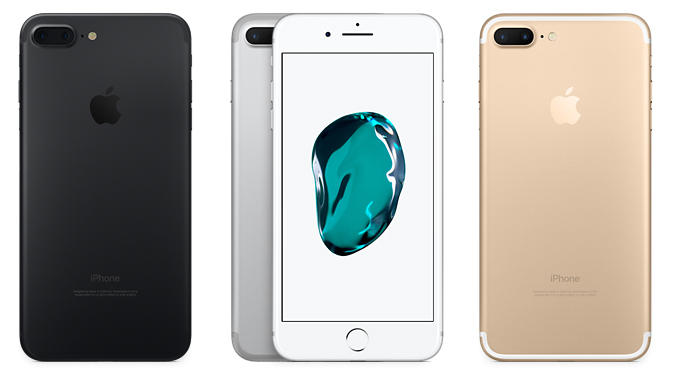 The new iPhone 7 is finally here and as expected it has arrived in two forms – the iPhone 7 and iPhone 7 Plus.

The iPhone 7 (standard) comes with 4.7-inch display with prices starting from £599 and it will be available in Silver, Gold, Rose Gold, Black (Mat) and Jet Black (Gloss) with seamless finish all the way up to the glass, which is impressive – most impressive.

Both models are built in a strong 7000 Series aluminium, which is elegant but resilient. Apple says the new handsets have been totally reengineered allowing them to be the first fully water-resistant iPhones and both are also dust-proof.

Processing, Power and Data:
Included in both models is Apple’s own A10 Fusion chip – with a new four core design it’s two times faster and efficient than the iPhone 6, and offers a longer battery life – two hours more on iPhone 7, one hour more on iPhone 7 Plus for average usage. Faster, but less power consumed.

For networking, the iPhone 7 and 7 Plus are 4G LTE Advanced and capable of 450Mbps data downloads anywhere in the world, that’s 50% more than iPhone 6s and three times faster than iPhone 6.

Sound’s Good:
Apple has introduced a new stereo speaker system with its next generation range of iPhones – with the capability to play at twice the volume of the previous generation iPhone 6s but still retaining quality whether it’s playing music, online streaming videos, or listening to calls through FaceTime or speaker phone calls.

As rumoured, no 3.5mm jack port is included but both iPhone 7 and iPhone 7 Plus come complete with brand new Apple EarPod headphones featuring a Lightning connector with a wireless version call AirPods arriving in October (which we’ll delve into a bit more in a further article). An adapter to convert the Lightning port is supplied which can convert this port for 3.5mm jack use – or what Apple refers to as your ‘old’ headphones.

Looks Great:
With Apple’s trademark Retina HD display on both models picture quality has been improved by a wider colour gamut – cinema standard in fact, which allows for near perfect colour accuracy. The screen also displays at 25% brighter than previous model iPhone 6S and features 3D Touch sensitivity – responsive to subtle taps and with feedback felt through the screen – literally a display that “comes to life” as Apple says. On the iPhone 7 you get 4.7-inches with 1334 x 750 pixel resolution and with the iPhone 7 Plus, a glorious 5.5-inches presented in 1902 x 1080 pixel resolution.

All-New Home Button and Touch ID:
The new Home button is solid-state button which is pressure sensitive and uses Apple’s Tap-tic engine built under the button. This is the same engine as employed by the Apple Watch and can be customised in the device settings for a perfecting your personal preferences of pressure and control. The iPhone 7 and 7 Plus Home button also includes Touch ID fingerprint sensor unlocking, the most sensitive ever. Security is key, which is particularly good to know as these handsets allow Apple Pay to be used worldwide.

Camera:
Another major focus of the new iPhones is the camera, which builds on what Apple calls “the most popular camera in the world” – and that’s probably true, as most photos are now captured by mobile and with Apple leading the market it’s a boast that you can’t easily dispute.

The iPhone 7 (standard) features a single 12-megapixel wide-angle camera with optical image stabilisation reducing the blur and offering three time longer exposure then last season’s iPhone. Up front is a 7-megapixel FaceTime HD Camera for capturing high quality, natural looking selfies (ideal!) and the camera tech is complete with Quad-LED True Tone Flash and f/1.8 aperture allowing 50% brighter pictures which is better for low-light photography. Edit what your camera captures in the new and improved Photos for iOS.

4K high-resolution video recording is also possible, again even in low-light, with a selection of settings and tricks available such as slo-mo and time-lapse.

The iPhone 7 Plus boasts two cameras that shoot as one – a pair of 12-megapixel cameras (one wide angle, same as iPhone 7 and also a telephoto camera) with 2x optical zoom and digital zoom up to 10x, meaning high quality pics from further away and 6x zoom for 4K High resolution videos.

There are also a host of effects to apply to your videos, including a new depth of field setting which is coming in a future update.

iOS 10:
iPhone 7 and 7 Plus come with iOS 10 included, stand out features include text messages in handwriting and customisable speech bubbles in Messages, as well as a smarter Siri, more accurate Maps and easier access to your favourite Music – and there’s that Apple Pay feature we mentioned earlier. We will cover iOS 10 in a bit more detail in the coming days before it becomes widely available on Apple device on September 13th.

What Do You Get – and When Do You Get It?
In the box buyers will find the iPhone of choice, along with accessories including – Lightning to USB Cable, 5W USB Power Adapter, EarPods with Lightning Connector, Lightning to 3.5mm Headphone Jack Adapter.

Pre-ordering for the iPhone 7 and iPhone 7 Plus in the United Kingdom begins at 8:01AM on September 9th – with both shipping and available in stores from September 16th. We will look out for news from the UK network providers about monthly tariffs and how to get the new iPhone through contract.