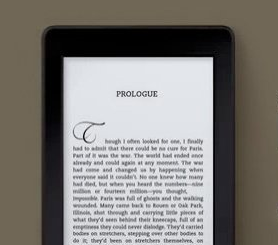 The next generation of Kindle e-reader has been officially/unofficially announced and will introduce a new touch technology to turn pages.

A leak of information by tablet maker Amazon itself, through the retailer’s own German website gave away some sparse details about the next Kindle product which we now know will be called Kindle Voyage. Before the listing was pulled some sources were able to grab screen shots revealing the new product to be a 15.2cm (6-inch) e-reader with sharp 300 pixel-per-inch screen with intelligent front lighting, a thickness of 8mm and overall weight of just 186 grams.

Translating more of the details from the German item description also reveals an interesting addition to the Kindle range.  The Kindle Voyage will apparently feature a new touch sensor to allow readers to flip through pages with a gentle press of the bezel rather than stabbing a finger at the delicate display. Unfortunately no photos leaked revealing the product look or how the touch works.

Referred to as a ‘high end e-reader’ the Kindle Voyage appears to match much of the same specifications as the rumoured Kindle ‘Ice Wine’ – a prototype which was recently suggested to be the successor to the Kindle Paperwhite. If this is the very same model it looks like it’s now got an official name and a release date of November the 4th.

Also in the leak from Amazon Germany were pricings for the Kindle Voyage in two variations, one Wi-Fi only for 189 Euros and a Wi-Fi and 3G model for 249 Euro.

The Gadget Helpline will update with further information when possible on the Kindle Voyage, as well as UK availability and price.