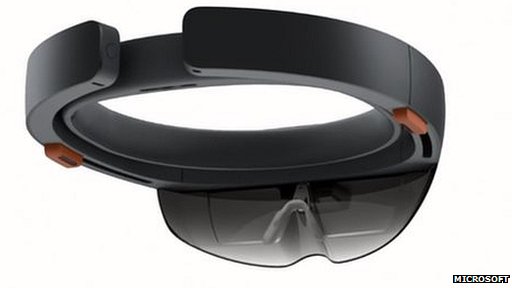 Head up displays and virtual reality have all been showed off recently, especially during the last year – but nobody has dabbled very far into holograms and holographic tech, until now. Fresh off their press conference on the 21st, Microsoft have announced a previously top secret holographic headset and software system – in our last of three articles on the event we’ll go in detail with just how the company has managed to pull this impressive feat off.

Microsoft’s hologram project has been very hushed – no leaks came out of the company, there was no real rumor or hint of the product from Microsoft themselves, and the project’s development was undertaken in relatively humble surroundings – hidden in plain sight on Microsoft’s campus.

SEE ALSO: PC on a Stick displays Windows 8.1 on your TV or monitor

But the device itself, this headset which projects screens and menus in front of the user’s gaze is definitely worth that secrecy, the device is profoundly futuristic, and possibly one of the first forays into the tech we’ve seen on a major scale from any of the big competitors in the industry. Microsoft even had to include an all new third processor a ‘holographic processing unit’ in the device to get it to work.

Simply put, the holographic headset from Microsoft allows you to see clearly rendered three dimensional objects in your field of vision – it’s similar to virtual reality, except instead of an image on a screen the holographic representation of the recently unveiled Windows 10 operating system is projected onto a lens in front of the user’s eyes.

Dubbed HoloLens, the device was demoed playing games such as Minecraft projected onto living room furniture, as well as Windows 10 elements projected over a kitchen to help with the cooking. The eyewear is already being tested by NASA, who have been workign together with Microsoft on the now unveiled project. 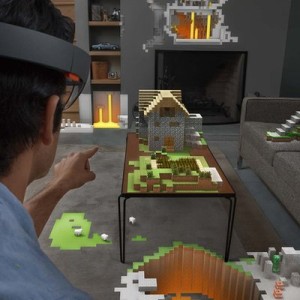 It’s not known at the moment how this holographic technology will translate into a marketed device – will HoloLens come sooner, or later to Windows 10 users. Indeed, Microsoft’s entry into the wearable eye wear section of virtual reality has come late, but seemingly from out of nowhere and sporting technology which hasn’t yet been tried by a competitor.

Between the shock announcement and the existing partnership with NASA, it does seem that a third runner in the vr headset race, HoloLens, has now appeared to compete with the Oculus Rift headset and Google Glass, the latter recently put back to the drawing board for additional design.

Could we expect to see any of these products reach consumers by the end of the year? it’s a tricky one – VR is still very much in development, and we may only see less well-funded forays into the tech later in the year. However, from now on consider Microsoft firmly established as one of the top companies to watch with regards to VR headsets.