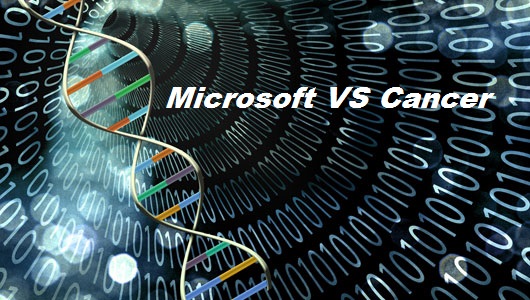 Microsoft are well known for their software and computing gadgetry, not so much for their battle vs cancer.

In Microsoft research labs across the planet, teams of people are working towards finding a way to beat cancer, or at least, help biologists find the way through tools Microsoft themselves have devised.

Using computer science they aim to give Biologists the ability to combat one of humanities greatest enemies. No test tubes involved here, they are doing this through the careful use of algorithms and computers.

One of the most promising areas of this research is machine-learning. Machine Learning is a branch of AI (Artificial Intelligence) that handles a lot of the legwork involved in precision targeted medicine.

Putting it basically. A machine-learning-system can identify a cat in a picture based on its previous knowledge of cat pictures (so, 90% of the internet). If you apply this to Cancer research, the same technique is being used to organize masses of research and medical data.

Microsoft researchers claim the company is in a good position to lead computing cancer efforts because of its long history as a software company providing a platform other people can build from and expand on:

We’re in a revolution with respect to cancer treatment – David Heckerman, Microsoft

Jasmin Fisher; a senior researcher for Microsoft has a goal.

Her goal is to understand the program, or instructions list, that causes a cell to execute its commands / behave in a certain way. Once you can build a computer program that describes the healthy behavior of a cell, and compare it to that of a diseased cell, you can figure out a way that the unhealthy behavior can be fixed. That’s the theory anyway.

One approach that Fisher and her team are undertaking is called Bio Model Analyzer, or BMA for short. BMA is a cloud-based tool that gives biologists the ability to model how cells interact and communicate with each other, and the connections they make.

Many researchers in this field believe that systems such as BMA have the possibility to revolutionize how cancer is understood. This success will only be fully realised if the biologists feel comfortable using them.

With this in mind, the researchers created tools that visually copy what scientists may use in the lab and using languages that biologists can understand. The breakthroughs needed will not come unless the systems the researchers develop are biologist-friendly.

The theory is, they approach biological systems just as they would a computer, and, in doing so, learn to program each cell individually. This breakthrough could open many possibilities for everything from treating diseases to feeding the World with enhanced crops (GM).

One theory is to create a sort of biological computer that could be implanted in a cell to monitor for disease. If this silent guard detected a disease it would implement a response to fight it.

The difference between this method and the current biological method for fighting cancer is staggering. One ends up destroying cells on a large scale in its process of fighting the cancerous ones, the other, focuses itself on the specific cells causing the issue.

Bear in mind here, having the above realised is quite a long way from what we currently have today. But, this is the dream.

There are a lot of ifs and mights involved when the people working in this area talk about their dreams to make this a reality. The thing is, there is a possibility here, and even if its a slim one, its one that’s worth working towards. We wish the team at Cambridge the best of luck in their endeavors!