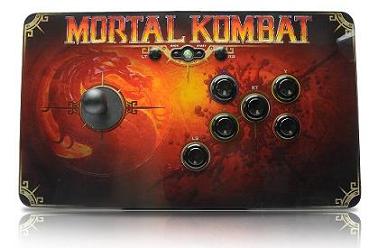 The much-anticipated reboot to the Mortal Kombat game franchise is on its way next month and looks to seriously kick ass and breathe new life into the saga after a series of lackluster sequels.

Rated “M” for mature, the new Mortal Kombat will be a dream come true for us 90s teens that grew up in the arcades brutally button bashing and tearing our friends apart with fearsome “fatalities”.

But this retro gaming experience gets even better with this frankly amazing (however slightly under-whelming named) “Fight Stick”, which brings all the old school joystick arcade control and thrill of the fight to our homes, with compatible versions being released for PS3 and Xbox 360.

Despite the lame title, developers at NetherRealm Studios have guaranteed excellence in the Fight Stick controls themself, which will be as near to the arcade experience as possible, using genuine Suzo Happ arcade parts with the underside of the controller being a memory foam layer which brings comfort to the function when tearing limbs in the living room.

The top of the controller is hinged to reveal a storage compartment underneath, so despite the bulky appearance the Fight Stick has every feature and function possible covered. It’s a thing of beauty for the gamer and just check out the artwork.

Mortal Kombat 2011 and the Fight Stick look set to be a perfect combo!