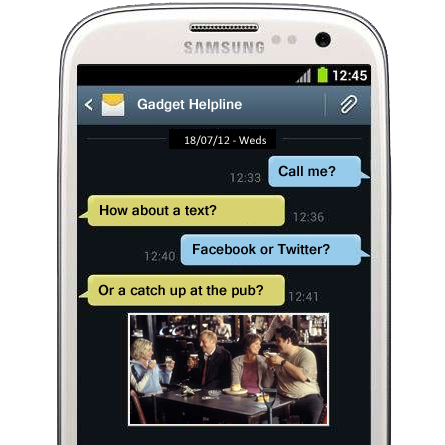 An Ofcom survey has revealed that communication via text has now overtaken traditional voice calls with 58% of the U.K residents questioned claiming they’re more likely to whip off a quick SMS than actually have a good old chin wag with their pals over the phone.

Industry regulator Ofcom’s annual marketing report has shown a staggering drop in call time by around one-billion minutes in just one year (that’s 124-billion in 2010, down to 124-billion in 2011). This decrease to 47% of all mobile communication has been mirrored by the increase in texts sent, with the statistics showing an average of 200 texts sent per month per British adult – that’s twice the number it was four years ago.

It might come as little surprise that this digital direction is being led by the teen and young adult gadget market and the survey also reveals that 39% of all adults own a smartphone which shows a 12% rise in just a year.

As for friendly trends such as Facebook and Twitter, the survey suggests these social networks are growing too and that they claim an average of 90 minutes of our life per week (we believe it’s more, maybe it’s just us). Despite being a strong presence and addictive form of communication in this digital age these methods are still overshadowed by our dependence on texting via a mobile phone with the convenience of the quick, easy and casual exchanging of faceless texts sadly becoming more preferable to the general public than the traditional meet-up and face-to-face chat.

As bloggers for the Gadget Helpline we’ve witnessed first-hand these changes to the way we communicate with our smartphones, with new hardware designs and software interfaces evolving to make text-based relations more accessible to everybody with free text software such as WhatsApp becoming incredibly popular and Facebook recently branching out with a separate Messenger app. There’s even a rumoured circular keyboard configuration on the new Windows Phone 8 – with the idea in mind that we could text even faster one-handed!

We think Ofcom’s findings are very interesting – and very eye opening. Let us know your thoughts on our comments below or via our @Gadget_Helpline Twitter page or Official Facebook group.