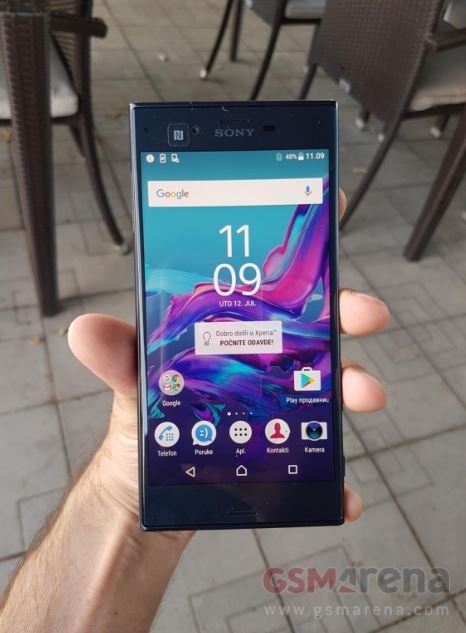 Sony’s next flagship smartphone the Xperia F8331 has been caught out in the wild thanks to some leaked photos shared by GSM Arena.

Obtaining the pics from an unknown source, the tech news site has shared shots of the handset, taken on 12 July according the Android home screen (which we suspect is Croatian – POCNITE ODAVDE meaning START HERE), and the handset is shown from all angles, thus revealing a new flat and taller form factor with rounded edges and flat top and bottom, unlike the previous Xperia Z range which was the brand’s premium offering up till now.

A generous screen appears to be featured, which is rumoured to display at 1080p and which we’d guesstimate measures around 5.2-inches, keeping tight to the side bezel. The NFC antenna seems to be found on the front at the top, to the left of the Sony logo (marked with the NFC symbol) and there is a pair of front-facing speakers visible.

The back of the leaked Xperia F8331 handset appears to have a nice blue brushed metal finish and you’ll notice the repositioning of the camera and dual-LED lenses to the left rather than in the centre which was standard on the Z series. The device’s main camera is believed to be capable of capturing 4K video (apparently the same for the front facing camera too). There seems to be a segmented bit at the bottom which we can’t really identify, but this could be the antenna band.

On the top edge we see the 3.5mm headphone port and to the bottom is the USB port – the first addition of USB Type-C port on an Xperia handset, and on the side we might have just glimpse the power button there in grey.

With the IFA event in Berlin this September quickly approaching we’d expect to see more of this Sony Xperia model as the date approaches and an official announcement perhaps sooner than expected now that the suspected new flagship model is out in the open.