WWE Network Launching in the UK and Ireland in Jan 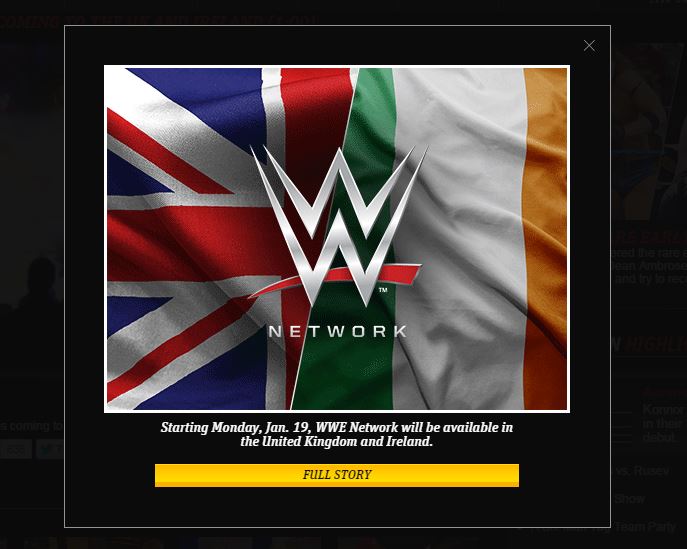 After months of waiting and an annoying unspecified delay, the WWE announced today that they will finally be launching their Wrestling Streaming service, the WWE Network in the UK and Ireland form January the 19th, 2015.

Originally planned to launch back in November in the UK and worldwide just a few minutes before the proposed launch, the WWE issued a very quick statement saying that:

The launch of @WWENetwork in the U.K. has been delayed until further notice.

With no other information surrounding why the launch in the UK and Ireland was nixed. Many believe the delay has been to do with the recent 5 five-year TV deal with BSkyB  that was signed in January 2014 for a major rights fees increase. The new deal, included all the WWE pay-per-views airing on Sky Sports and Sky Box Office.

With Sky currently airing all the PPVs, with 4 pay-per-views airing on Sky Sports at no extra charge for people who have the channel, and the PPV’s that air on Sky Sports charged at £14.95 on Box Office.

However, these teething issues appear to have been sorted out, as Rasslin’ fans in the UK and Ireland will have access to the WWE Network from January the 19th.

For those that are not in the Wrestling know, the WWE Network is a Streaming service dedicated to the world of the WWE/WWF and other major Wrestling promotions. The WWE Network offers subscribers access to all of the WWE’s PPV events across the year, streaming of classic content and original programming all focussed around the World of the WWE/WWF and older wrestling promotions such as WCW and beyond.

The only thing missing from the vast library of Content is current Raw and Smackdown shows, but tis is somewhat made up for with the inclusion of the WWE’s feeder system, NXT, which offers amazing entertainment for the companies up and coming talent.

The service itself is a monthly subscription, for £9.99, which is pretty annoying for us UK folks, as subscribers in the US also pay $9.99 which is more than a Third cheaper than the UK pricing. However, for the boat load of content that you get, we can’t say it’s not tempting us!

The WWE Network goes live from January the 19th, and will be available to watch through an internet browser, or on iPhone, iPad or Android devices for this first week, with support via apps on the Xbox One, Xbox 360, Amazon Fire TV, Apple TV, Roku boxes and select smart TVs.

There have been no news on a free trial period that was originally promised, but the Network will launch just before the WWE’s Royal Rumble event in January.