If you’re a regular social networker you might have spotted those impressive 360 degree interactive panoramas popping up on Facebook recently. Most memorable was the one released to celebrate Star Wars: The Force Awakens which allowed explorers of a galaxy far, far away to explore the new planet Jakku.

The latest one we’ve spotted that we thought was incredibly cool is a bit more down to Earth and will really appeal to fans of the Rocky film series as it allows viewers to climb the famous steps of the Philadelphia Museum of Art. This iconic landscape was where the hometown boxing champ played by Sylvester Stallone used to run during his training and was seen in all six of his movies and which was recently seen again in the spin-off Creed.

The knockout video comes from the Facebook page of US news show ABC 20/20 and features an ascent of the Rocky Steps which viewers can rotate to view each and every angle of the location as it plays. As you climb you’ll encounter passers-by and watching runners recreating the famous scene in Rocky’s training routine. You’ll even hear the authentic sounds. It’s like you’re actually living it.

This clever new video format comes thanks to a 360 degree camera system designed to capture moving image that allows viewers to immerse themselves in a complete panorama. You can look up at the Philadelphia Museum of Art as you rise to the challenge, check out the steps below your virtual feet or look up at the sky. But we’d recommend turning to take in the Philly skyline where you can – as Rocky remarks in his latest flick – “see your whole life from up here.”

The only thing missing is the Rocky statue which stood tall since 1983 but was moved from the top of the steps and since 2006 has resided in the grounds below. You can however look at the Rocky footprints which are now in the place where the bronze “Italian Stallion” once stood. 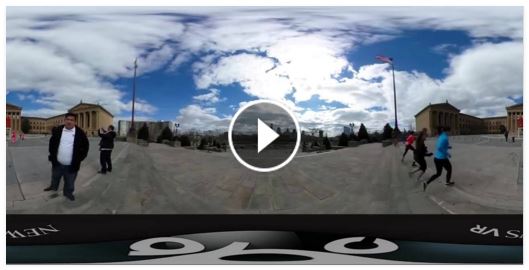 If your Android or iOS device or desktop web browser supports 360 video we really recommend checking this one out – or even better hook up a Samsung Gear VR or similar and experience it all in breath-taking VR.

Also See: Virtual Reality & Augmented Reality to Rule 2016 – But Which is Which?