Facebook has partnered with a number of suicide prevention organisations to introduce a new feature with which users can report posts that might suggest a friend is in need of help and support.

In a post made on the Facebook Safety page, the social network comments on its responsibility to our safety and outlines what it intends to do to aid in the emotional and mental wellbeing of its active users who are now numbered at over 890 million (according to December 2014 report) many of who suffer from depression which can often not be noticeable on the surface. 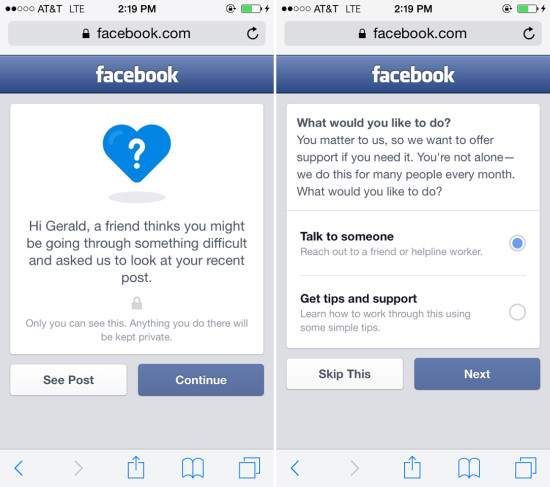 By working with global organisations such as the National Suicide Prevention Lifeline and Save.org they are allowing friends and family members to log potentially suicidal posts with Facebook who will contact the person of concern and give them access to resources and advice or means to reach out to a friend or professional. Reported posts are reviewed and responded to by Facebook staff 24 hours a day.

This is a great step forward and we really applaud Facebook for their active front on suicide and this proves to highlight how the way we express ourselves and our feelings has seriously evolved in the age of social networking – both for better and worse.

Consider the fact that a lot of us have had at least one bad day where instead of thinking about ways to overcome a problem we’ve immediately logged onto Facebook to vent our woes, which might not be that serious at all.

Undoubtedly social media has given everybody a platform to complain about the unfairness in life, however trivial, and have we have really taken advantage of it. Because let’s face it – Facebook can be a pretty depressing place anyway. It’s something most of us have been guilty of at one point.

But between these posts there are those who are genuinely distressed and experiencing suicidal thoughts and are being overlooked – or simply can’t find the words. It’s not always going to be evident from someone’s status but we really hope the right people are going to benefit from this scheme.

Facebook will introduce its new suicide prevention feature to the US first before hopefully rolling it out to the rest of the world. More information about it is available on the Facebook Safety page.