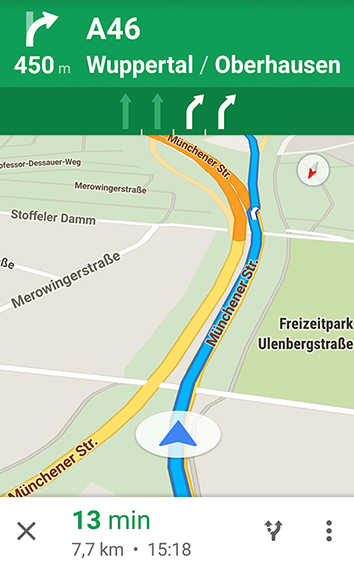 One of my personal pet peeves is people who are in the wrong lane at a roundabout and then cut you up last minute, making out you were in the wrong! Well, before I start myself off on a rant, I’ll cut to the chase – Google Maps Lane Navigation has finally reached Europe, including the UK!

Google announced the new additions on their Official Google Europe blog a few days ago.

Now this feature isn’t as shiny and new as it may seem. The lane navigation extra has been a part of American life since May but now will become available in European countries such as UK including ROI, France, Italy, Spain and Germany.

The additional feature pretty much does what it says on the tin. It lets you know which lane to get into when driving the route planned; hopefully putting an end to mindless cutting up and lane hogging.

What’s best is that the app won’t even need updating; the lane guides will automatically appear beneath the next route direction. Despite being a Google app, they’re also, very generously, adding the feature to their iOS app devices too.

Currently there is no further news on when or if the update will be introduced to any other remaining countries, but being Google, I can’t imagine them leaving other countries in the dark for too long.