Home » Operating Systems » Apple iOS » How to Use Night Shift Mode in iOS 9.3

How to Use Night Shift Mode in iOS 9.3

One of the worst habits of our day-to-day lives in this modern technological age is using our smart devices at bedtime. This is scientifically and medically proven to affect our sleep pattern, behaviour and raise stress levels, largely due to the blue light emitted from our bright retina-popping screens. Despite the warnings we all still do it.

So Apple, one of the world’s leading smartphone and tablet manufacturers has added a new feature to its upcoming iOS 9.3 which will hopefully reduce the effects of late night gadget use by shifting the blue light to a warmer tone. It’s called Night Shift.

iOS 9.3 is currently in preview stage with no release date announced for a full roll out on iPhone, iPad and iPod Touch but details have been released on how the Night Shift mode will work and how to use it. Apple states –

Night Shift uses your iOS device’s clock and geolocation to determine when it’s sunset in your location. Then it automatically shifts the colors in your display to the warmer end of the spectrum, making it easier on your eyes. In the morning, it returns the display to its regular settings.

If you’re lucky enough to get your digits on the new software then follow these steps to utilise the Night Shift feature:

Next you can set a Schedule for it to turn on.

The options offer Sunset to Sunrise or Custom settings.

If choosing Custom, set a Turn On At and Turn Off At time by scrolling through the hours and minutes.

Then set your screen tone to Warmer or Cooler using the slider bar.

It may also be possible to access some quick Night Shift settings through the Control Center when iOS 9.3 is released. An official looking picture recently surfaced on a Reddit post showing the icon for Night Mode appearing in Control Center on an Apple iPad with the options to toggle between Turn On For Now and Turn On Until Tomorrow. 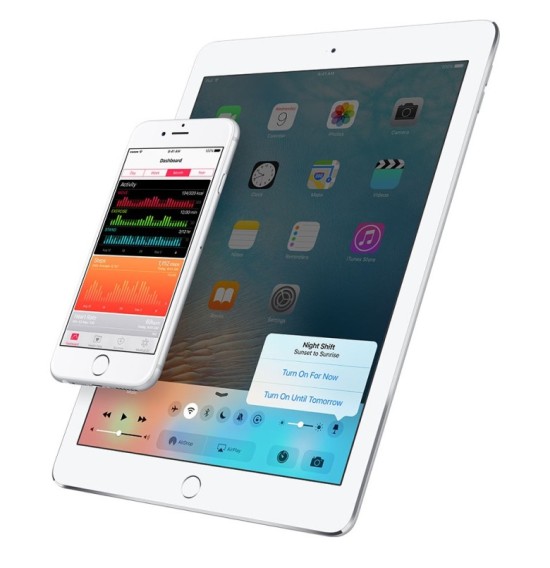