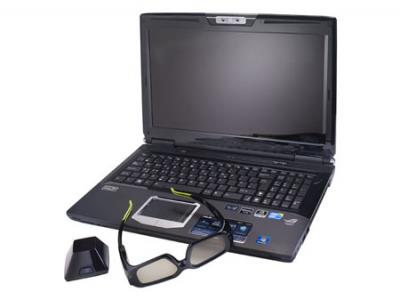 Toshiba has announced two new laptops which will feature 3D-capable webcams, as well as a new range of Satellite L-series notebooks with 3D playback functionality.

The Satellite P770 and P775 laptops are top of the range, say Toshiba. They both feature large 17.3-inch screens, as well as 3D webcams.

We assume 3D webcam software will be pre-loaded by Toshiba to allow the user to take 3D snaps and possibly video, but what about 3D video chat? As yet such software doesn’t exist, so we’re now looking to Skype and Fring to make that a possibility.

The Satellite L-series of laptops feature 3D playback capabilities, viewed using active-shutter glasses much like the current generation of 3DTVs. They can also convert 2D to 3D video, as well as providing external 3D playback. Toshiba have integrated top quality Onkyo speakers as well, which they say will “deliver immersive sound to match stunning visuals”.

Toshiba will be releasing both new Satellite ranges in a number of different screen and hardware configurations, offering both AMD and Intel processors as well as dedicated Nvidia graphics for the higher spec models.

Pricing is yet to be announced, but both the P and L series of Satellite laptops should be available in the UK as of late April 2011.

We’d like to know your thoughts on 3D Video Calling, so let us know by leaving a comment or head over to our Facebook Page and let us know!