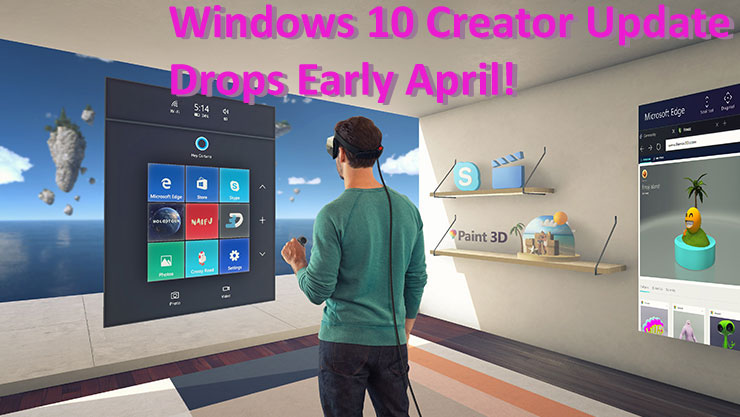 From the embers of the last big patch to come Windows 10’s way emerges the phoenix. Well that is what Microsoft are probably hoping anyway. Last years major Windows 10 Anniversary patch did not go down too well with many Windows users, (black screen crashes, privacy outcries etc) and not so hot on its heels is the Windows 10 Creators Update.

Also known as Redstone 2, the Creators update is looking promising. It seems to be heavily weighing in towards VR and AR and has updated Windows paint to Windows Paint 3D (Link included below for Preview) which in turn seems chock full of new surprises:

The new Paint 3D app that will be included with Windows 10 Creators Update allows you to work with and create 3D models. You will have the option to scan an object with a smartphone using the “Windows Capture 3D Experience” and then insert into a Paint 3D project and thus modify it.

Microsoft reportedly showed this off using a Windows Phone, but also said that it envisioned this being possible with any device, so yes, iPhone and Android users will be able to join in on the fun.

The update release has been suggested over at MSPoweruser (link included below) for the 11th April 2017 which is rapidly approaching. We at Gadgethelpline imagine Microsoft Devs running around like headless chickens trying to finalise the product for release in less than three weeks.

Microsoft will also be letting its users know when the Windows 10 Creators Update is ready for release. They will be notified not only on the date but also on what the changes to their privacy settings will be in the OS. Users will then be able to review  their privacy settings within the notification dialog which is a vast improvement from the previous effort.
Adding to the above, once the user has begun to install the update they will then be able to modify privacy settings from the new out-of-box-experience in Windows 10 Creators Update.

User will be able to choose one of three options; install instantly, choose a time and date or ask to be notified later.

And that’s not all. The new games settings page in the Windows Settings App will allow the user to tweak a number of options to enable your machine to run more smoothly when playing their current favorite games

So, to sum up, the Windows 10 Creators Update focuses on creative professionals, with enhanced 3D support, better Windows Ink functionality, increased gaming performance and much more!