Home » Site-Sections » Gadget News » Back to the Future Day – The 2015 Gadget Predictions That Happened!

Back to the Future Day – The 2015 Gadget Predictions That Happened!

To some today is only October 21st 2015. But to many of us this is more than just another date on the calendar, because according to popular 80s sequel Back to the Future II this is the day when Marty McFly (Michael J. Fox) arrives in the time-travelling DeLorean from 1985. Yes, it really is the correct day and this is not based on another annoying internet meme trying to blur our childhood memories!

Today will be filled with mostly celebration but also a tinge of disappointment as some of the big predictions according to the 2015 as seen in BTTF2 have not yet come true as many would have hoped. We still need roads, despite Doc Brown’s suggestion that we won’t need them. Excitable child fans of 30 years ago were this morning grumpy grown-ups sat in traffic because we’re not really any closer to getting those waste-fuelled flying cars.

But it’s not a total nightmare future because some of the cool stuff from the movie has actually happened. You might not have noticed some of these smaller details while you were waiting for your hover board to show up, but there’s a fair amount of modern tech you can spot in Back to the Future II if you look closely.

For example – You’ve probably forgotten all about the dog-walking drone, right? Yes there are drones in future Hill Valley – and in the real 2015 these unmanned aerial vehicles are becoming common place for combat and reconnaissance as well as being widely retailed for personal use. 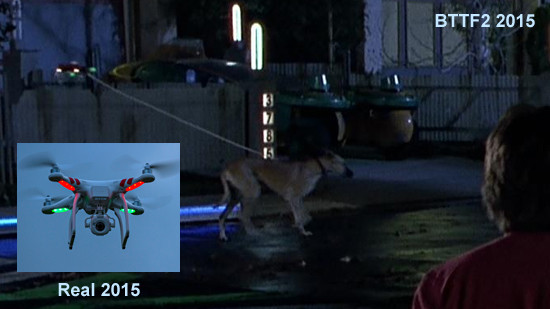 Also think back (or forward) to the McFly family home. It’s filled with wearable tech and items that could be considered modern smart-devices. From Marty Jr’s video spectacles (which in the film are JVC branded) that appear to work much like the Sony Project Morpheus and Oculus Rift – and the front door of 3793 Oakhurst Street on which there was a finger print scanner used to unlock it. This is a feature similar to the one recently introduced on smartphones including the Samsung Galaxy S6 and Sony Xperia Z5. 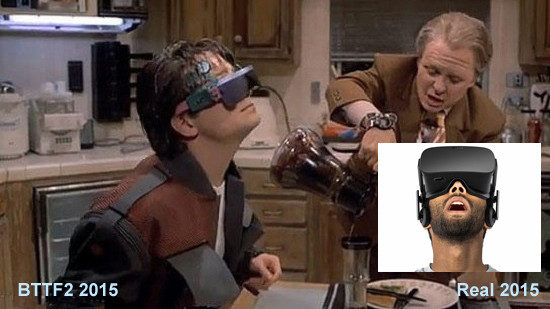 There are also references to holograms in the town square (Jaws 19!), touch screens, video calling and wireless payments/internet banking when Marty Snr. is asked to wire funds electronically to a colleague and virtual reality gaming is touched on, so to speak, in the Café 80s scene when Marty demonstrates his skills on a shooting game and is teased by kids about having to ‘use your hands’ to play it (coincidentally, in our 2015, one of those youngsters is Lord of the Rings star Elijah Wood). 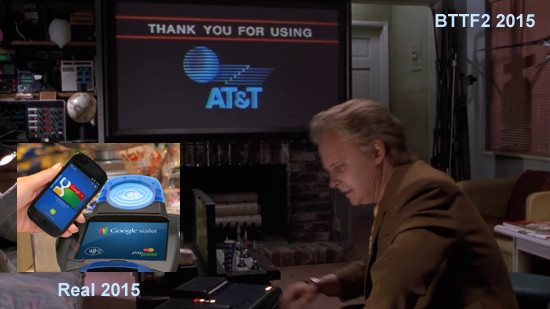 So, you don’t have it so bad in this version of 2015, do you? And despite many of Back to the Future II’s 2015 predictions begin fairly tongue-in-cheek and fantastical you can look forward to owning that hoverboard very soon as they’re actually being developed as we speak. Heavy! 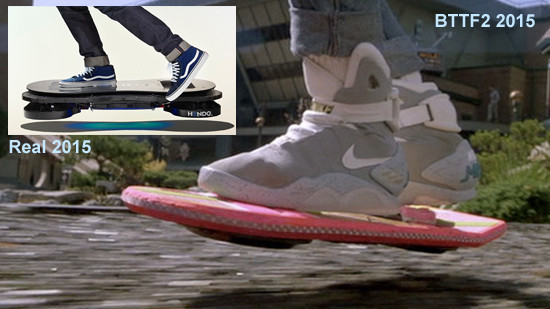