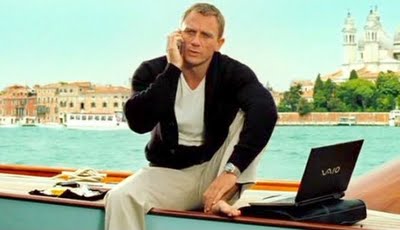 With Nokia teaming up with Batman on a promotional range of Lumia Dark Knight Rises branded goodies – including a Limited Edition Lumia 900 handset in the United Kingdom, Lumia 710 back casing in the United States and an exclusive app now available for Windows Phone devices – we had to wonder which of our big screen heroes would be next to partner with a mobile manufacturer as the summer cinema season starts to heat up.

That mystery may have been solved today as the world’s most famous spy James Bond looks to joins forces with Sony for his upcoming movie Skyfall!

James Bond will return this October in the twenty-third official film in the gadget-loaded spy series, which again is being produced by Sony Pictures Entertainment, and it seems that Sony’s tech divisions might also be putting all their chips on Agent 007 when the movie’s promotional push launches soon.

Speculation suggests that Sony is planning to slip some of its new hardware into Skyfall for a cameo appearance after footage of the new movie revealed mission-maker M played by Dame Judi Dench using a VAIO branded laptop. This also follows the VAIO’s appearance in Casino Royale and the Sony Ericsson C902 mobile’s appearance in Quantum of Solace – both Daniel Craig episodes.

When interrogated by fellow tech site Pocket-lint Sony declined to answer but we think it’s likely that the Sony/Bond partnership – which is more long-lasting than any of the spy’s previous relationships – will return in Skyfall as it prepares its descent to cinemas.

What this entails is still in question – but we’d hope for a new Xperia handset that employs a number of Q Branches’ finest achievements and of course that familiar Bond tune as a ringtone!